I am a firm believer that the solution to the golf industry’s troubles is to grow the game amongst new players as opposed to trying to squeeze more money, time and participation out of existing players.  This may seem like an obvious statement but not everyone in the industry agrees with me, starting with some major equipment manufacturers who have told me as much.


In order to grow the game amongst new players, we need to do two things:
1.    Be honest in our assessment of where we stand and why.  We don’t always see this, as evidenced by this recent Tweet by SNAG on February 13:
snaggolf‏@snaggolf – 10 million kids learning #golf using SNAG! http://tinyurl.com/7d7fn8j
If you click on SNAG’s link, you’ll see that it’s a Press Release not for SNAG, but The First Tee (and SNAG is not mentioned once) announcing The First Tee's goal of reaching 10 million children.  It caught my attention because I know there are only 2.5 million kids total playing golf in the U.S.  Nevertheless, I saw industry members Retweeting this post believing it to be accurate.  I know and respect SNAG’s executive team and like what they’re doing for the game, so I hope this misleading Tweet was a mistake.  Regardless, it's a good example of what many golf companies and organizations are doing – claiming lofty achievements that aren’t really there.  And it needs to stop.
2.    Have active, open and engaging conversations about ways to grow the game.  To that end, two platforms have recently emerged that are facilitating good discussions:
A.   The first is the Twitter hashtag #growgolf.  As to be expected, some people add it to Tweets that aren’t actually about growing golf but you can find some real idea gems if you read through the timeline.  More importantly, it’s a positive step towards initiating a valuable dialogue and I’m happy to see participation from industry leaders on down.
B.   The second is a LinkedIn group for Junior Golf that has had some compelling discussions.  If you’re in the world of junior golf, I encourage you to join the group and jump in on the conversations.  I know it’s been an educational resource for me.
My challenge to the industry is to stop focusing energy and money on PR campaigns about growing the game that serve as smoke screens for the fact that, in the last five years, youth participation has dropped 34% from 3.8 million to 2.5 million and overall participation has dropped 13% from 30 million to 26.1 million.  (The full participation report is below.)  Those are staggering statistics.  And, they tell me that none of us in the industry are doing a good enough job – myself included.
Once we take ownership of our reality, let’s have an open dialogue about solutions where innovation, entrepreneurship and efforts that have tangible proof of growing the game are embraced.  I’m happy to see this happening on Twitter and LinkedIn and I hope other platforms arise as well – starting with this blog. 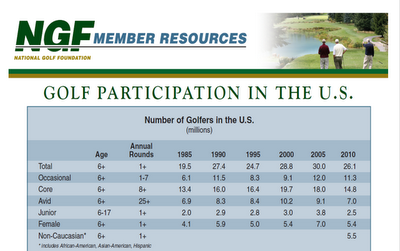